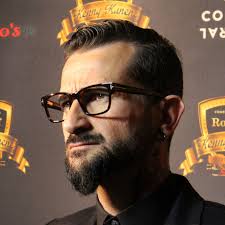 For over 20 years John Vlismas has deftly walked the line between underground, alternative and mainstream comedy. His particular brand of strange and hilarious has charmed local and international audiences alike. His absurd worldview has the rare ability to resonate across any audience. Corporate groups, spotty students and mensa inductees all respond to his unique, home grown observations.

He has written, directed, lectured, acted and mc’d in all kinds of venues from seedy bars to the Royal Albert Hall. He’s odd, he’s mad, he’s sharper than you and he’s the guy that gets the guy who booked him a promotion.

As a Drama student, John won acclaim for his writing, first representing South Africa at the African regional finals of the Interplay World Fest of Young Playwrights in Nairobi and later represented Africa at the World Final in Townsville, Aus.

After two decades of groundbreaking work as a stand-up comic, John Vlismas returned to his roots as an ardent fan of theatre production. He began a production house to fulfill the needs of his talent management company’s stable.

Startling creative work entwined with an intimate knowledge of traditional and current technical solutions combine to give this creative director an edge. Add to these qualities twenty years of performing to audiences in 8 countries, and this award-winning performer is able to turn a scribble on a napkin into a high definition show-stopper.