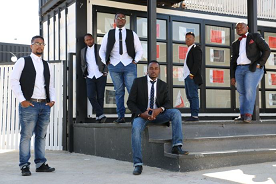 Just 6 is a Afro-Pop/Soul, Jazz and Gospel contemporary A Cappella male ensemble from Gauteng, South Africa.

The band is made up by:

The group was originally formed as a Quartet in 2011 by Rashaka at a Church Camp Meeting. As the group grew two members were added to the Quartet and the group began to perform as JUST 6.

In 2012, Just 6 independently released their debut EP, “Stimela” to give people an idea of what they were all about.

In March 2013 Just 6 launched their EP at their first live concert in Pretoria at The Unisa Little Theatre.

In 2014 Just 6 again independently recorded and released their debut album called “Kuzolunga” featuring artists like Loyiso Bala & Zarcia Zacheus. This album went on to win several Awards across the globe.

In 2015 Just 6 recorded and released the “Take Me Back” EP which is available on iTunes.

Afro-Cal Play (Afro Vocal Play): A mixture of great vocal techniques first heard from Ladysmith Black Mambazo, Take 6, Naturally 7, Pentatonix and The Real Group in emulating instrumental sounds and resonances to produce music. We’ve taken all these elements and put them together in a distinctly African way to produce the sound of: “Stimela”, “Kuzolunga” and “Take Me Back“.