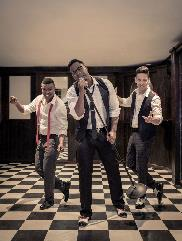 When 3 South African music heavyweights join forces something “Supreme” is born.Loyiso Bala, Lloyd Cele and Danny K have come together to pay tribute to one of their favourite eras in music – Motown.

The three artists have picked their favourite Motown classics and added their unique twists to collectively form a high energy, fun and unique take on some of the greatest songs of all time.

Supreme 3 is not just a cover band, but a full blown show, dedicated to bringing everyone’s favourite Motown, funk and soul hits to life in 2017 and beyond.

Having cut his teeth as a Drakensberg Boy, Loyiso has gone on to forge a formidable career becoming a 5 time SAMA winner in the process, cementing his spot as a true legend of the SA industry. Loyiso is currently a board member of SAMRO, a TV host on DSTV’s TBN and is currently working on a new solo album due to be released later in 2017.

Lloyd Cele is one of South Africa’s most loved entertainers. Having cut his teeth as runner up to Elvis Blue on Idols, Lloyd went on to receive SAMA nominations also winning a Metro FM award. Lloyd started 2017 releasing 2 singles and has landed a role hosting a show on DSTV’s Soweto TV.

The four time SAMA winner Danny K has been an ever present in the SA music industry since he burst onto the scene in the early 2000s. Not only has his music graced the airwaves for over a decade but Danny has also established himself as a style icon, brand ambassador and philanthropist through his music talent. Danny is currently working on new music and is set to feature on a brand new reality TV show that will grace SABC 1 from June.