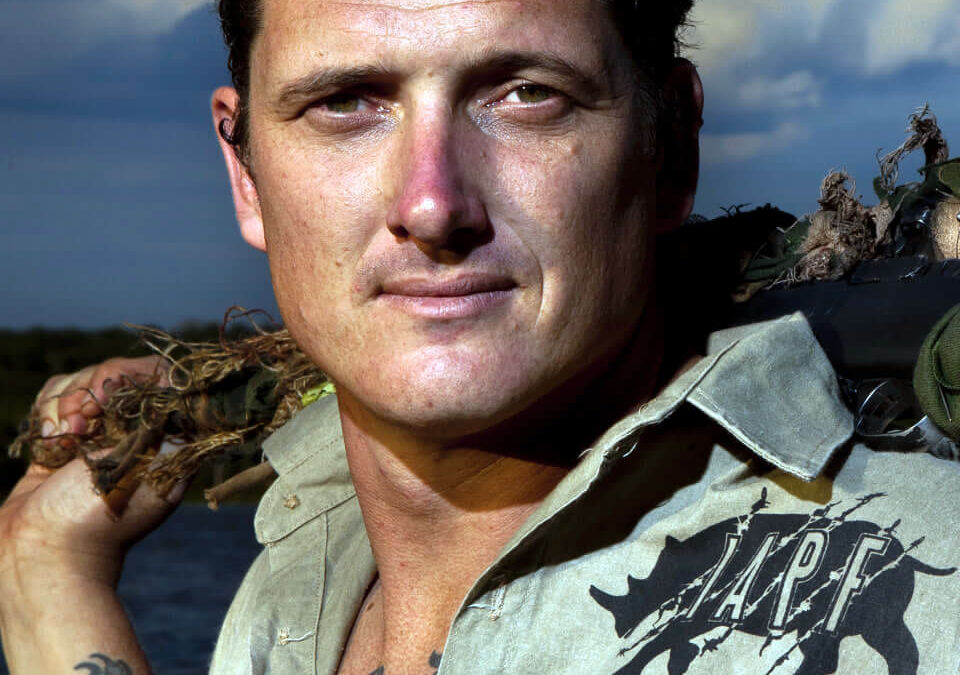 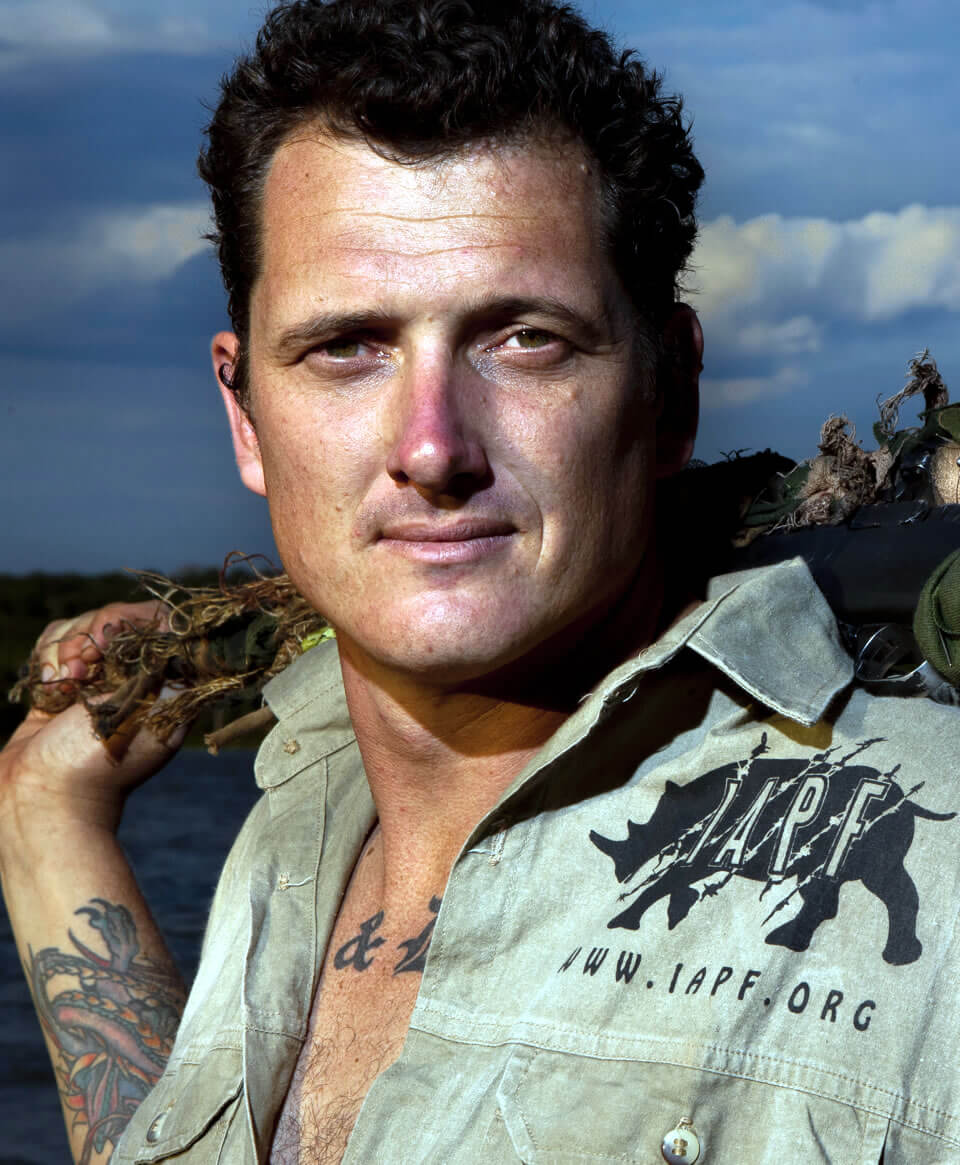 Damien has informed, entertained, motivated and inspired select audiences around the world with highlights including; a packed Sydney Opera House for TEDx 2013, Obama’s Presidential Advisory Council on Wildlife Trafficking at the Department of Interior in Washington DC, The United Nations Great Apes Survival Summit in Jackson Hole, The Royal Geographical Society in London and sell-out crowds at The Explorers Club in New York City.

Damien has lived an extraordinary life for a 37 year old. At 19, as a garbage collector in Melbourne, he joined the Australian Defense Force as a Clearance Diver and went on to become a Special Operations Sniper. Later becoming a mercenary, he deployed to Iraq where, amongst other roles, he Project Managed the Iraq Special Police Training Academy overseeing paramilitary training and deployment of troops. Following three years service in Iraq, he left the frontlines with no direction in life.

A trip to Africa in early 2009 awakened him to the horrors that the natural world is facing from poaching. Identifying his niche capabilities to dealing with this injustice, Damien liquidated his wartime savings, and founded the International Anti-Poaching Foundation (IAPF). Now a multinational not-for-profit, the IAPF runs operations on the frontlines of the world wildlife wars. Using battle-proven training and management methods IAPF applies a project based paradigm, whereby they operate only in areas which represent high environmental value and where application of unique skills can produce an effective and enduring local solution. 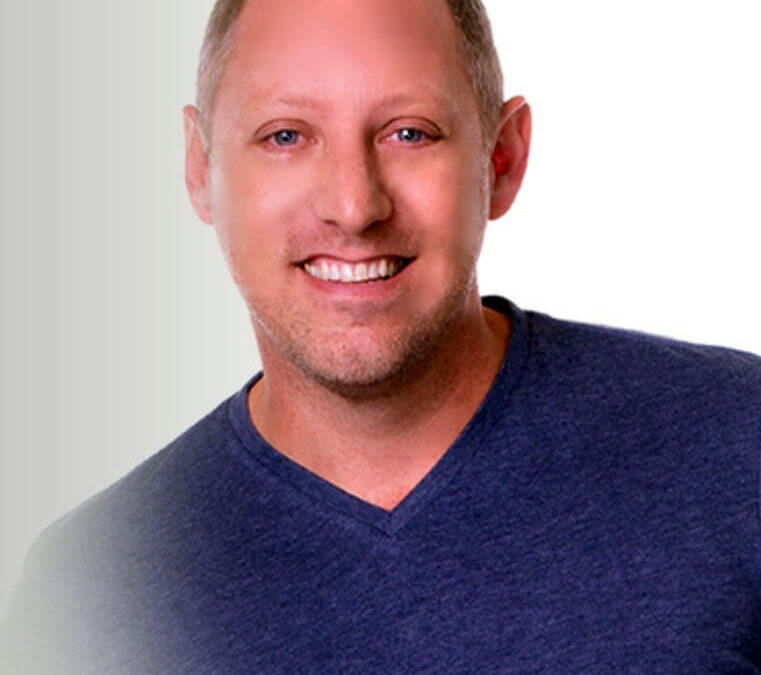 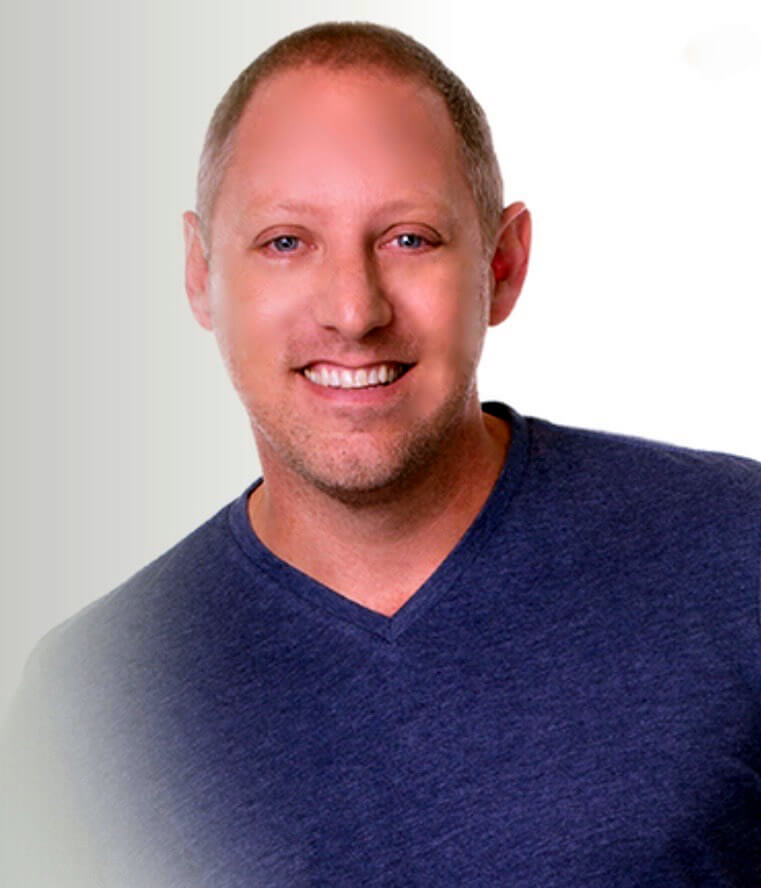 Having joined East Coast Radio in 1991, Damon is not only a seasoned professional but also the nice guy next door; your buddy; older brother and office friend.

He’s all this and so much more to his loyal fans. You can tell by listening to him that this incredible radio presenter is just a great guy – his warm, honest personality and great sense of humour comes through loud and clear when he’s on air weekdays from 9 – 12 noon.

Damon enthrals audiences with his two motivational talks, each being approximately 50 minutes in length.

One entitled V1 ROTATE is aimed at anyone struggling with debilitating fears and how to live out of your comfort zone, overcoming hurdles that are holding you back.

DEAR DAMON… is a heart-warming story of Damon’s journey as a radio presenter and the countless people he has helped on his Big Favour Programme. 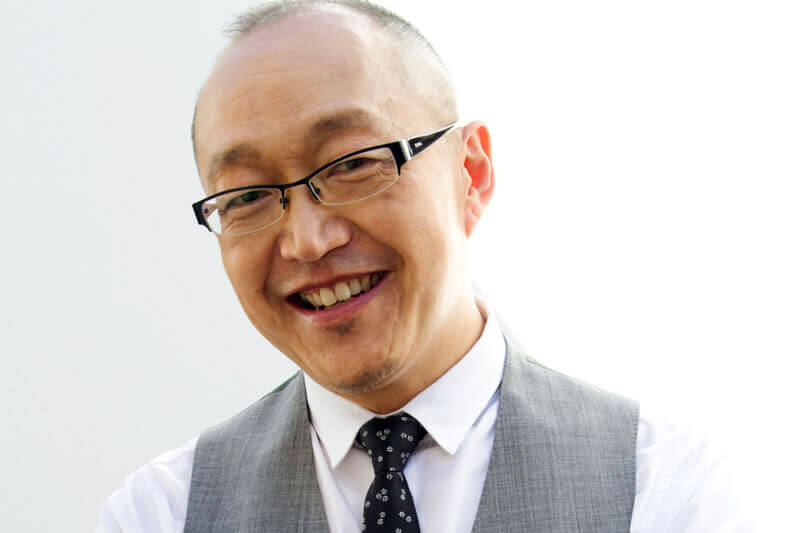 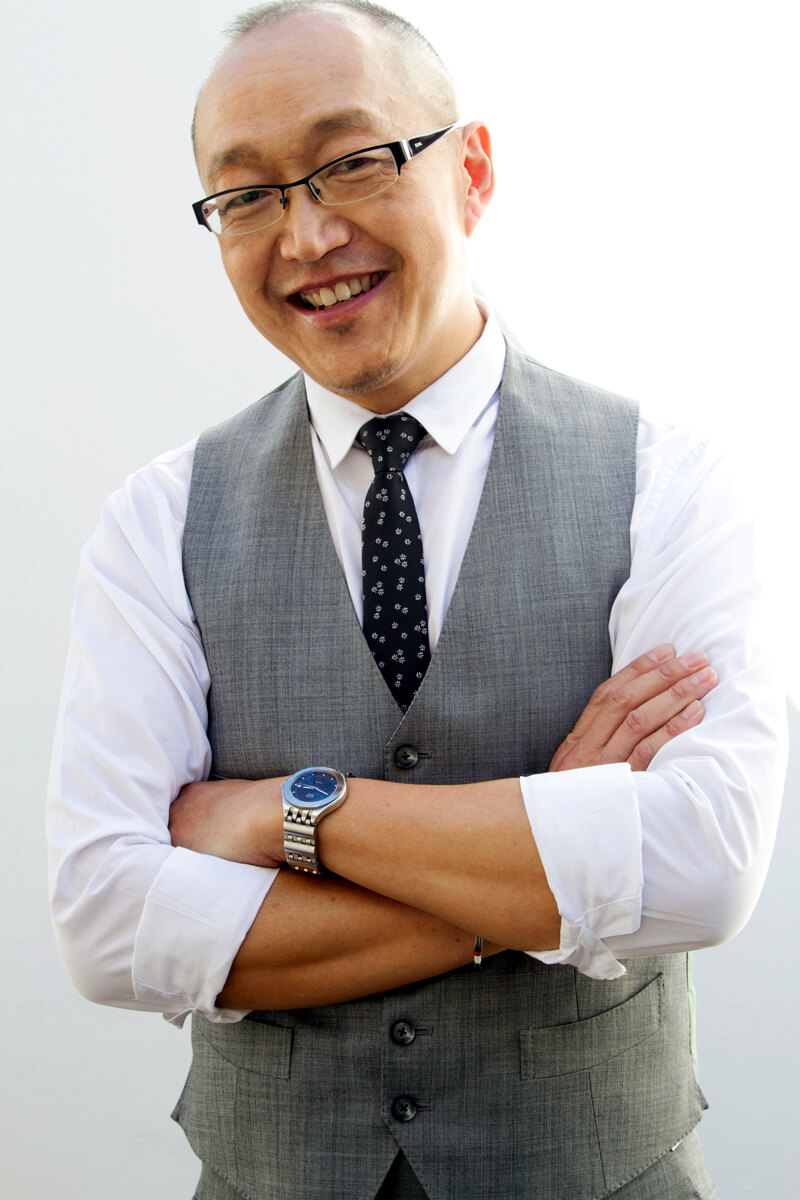 Dion Chang is an innovator, creative thinker and walking ideas bank. He is one of South Africa’s most respected trend analysts and takes the unique view of “trends as business strategy”. While his feet remain firmly planted on African soil, he uses a global perspective to gauge the zeitgeist, source ahead-of-the-curve concepts and identify shifting business templates. In a world struggling to adapt to a new world order, his trends analysis company – Flux Trends – specializes in understanding consumer mindset and identifying unexpected business opportunities within shifting trends, ensuring that global trends have relevance when translated for South African businesses.

He has 20 years experience in the magazine industry and as a journalist and media spokesman, which enables him to provide insights into the ever-changing relationship between brands, consumers and the communication channels that bind them.

He has devised and hosted 3 trend conferences and published 3 trend books (the last being, “New Urban Tribes of South Africa”). Flux Trends currently releases industry specific trend reports every quarter. Apart from being an information source on a cross section of trends for many journalists, he currently writes columns for City Press, SAA’s Sawubona magazine, Acumen (a C-suite business quarterly for GIBS) and has a monthly radio slot on MetroFM, and contributes to eBizRadio, an online radio portal.

He is part of the Duke CE faculty and also lectures a trend module at UCT’s Graduate School of Business for business executives and senior management, focusing on “The Business of Disruption”. He is passionate about youth trends and subcultures, their impact and influence on an emerging new world order, as well as innovative ideas for greater good. 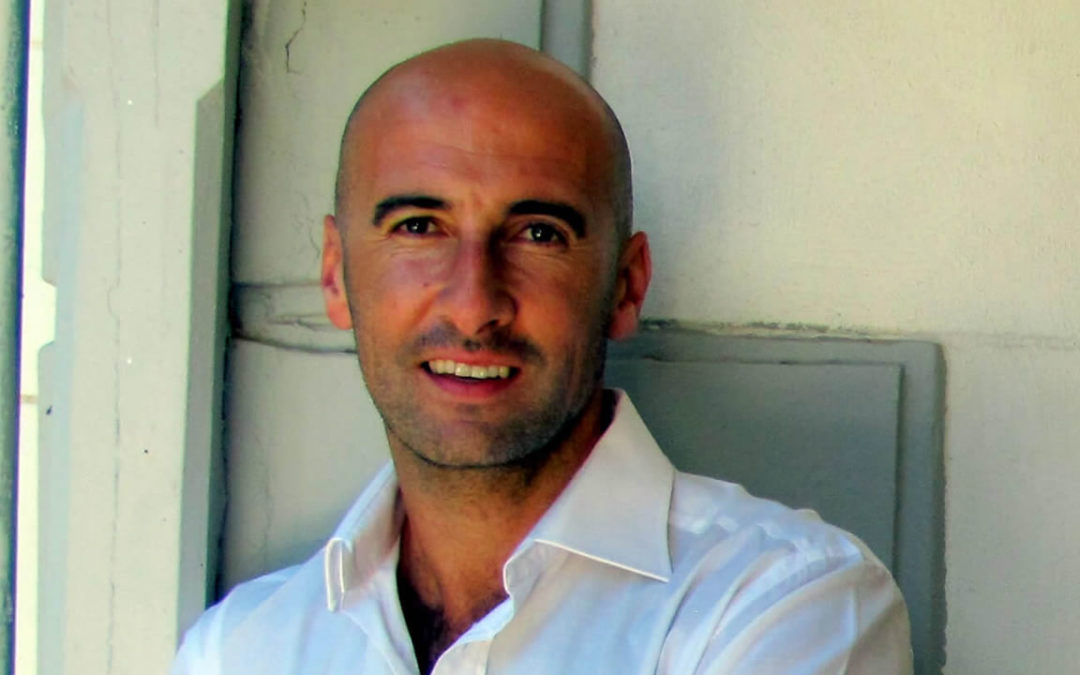 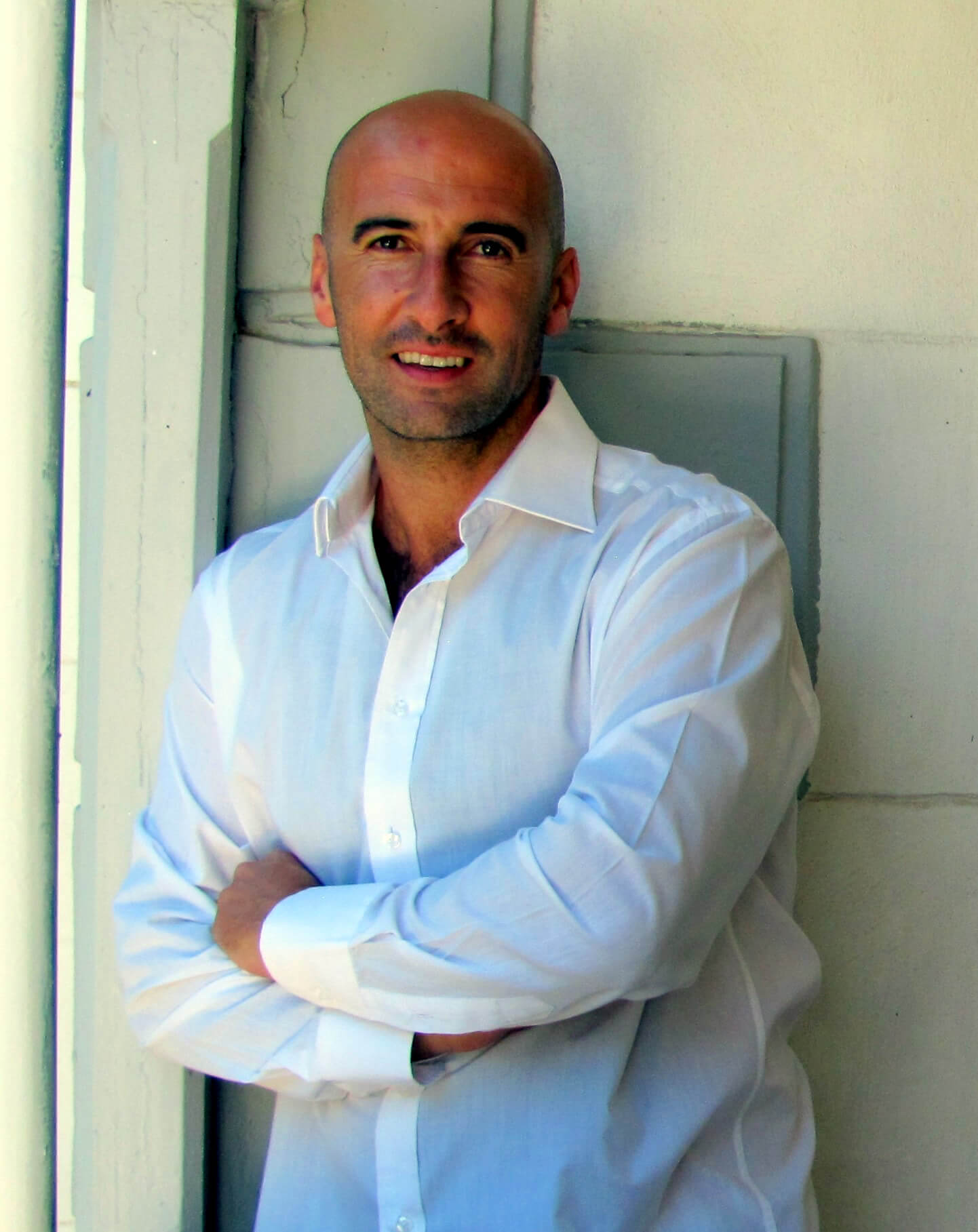 He was brought up in the West Country of England and was the first person in my family to go to university. Since then I have gone on to teach at leading Universities in South Africa, Australia, Northern Ireland and the UK. Dean established a reputation as a popular guest lecturer and speaker, and have presented motivational talks and keynote papers around the world.

He attributes much of my success to the cultures and people he has been exposed to during my travels. South Africans in particular have taught him that the power of determination, when channelled correctly, is immensely powerful. He is greatly influenced by one of the greatest statesmen of our time, Nelson Mandela – a true leader who also saw the value of sport in uniting people and healing the past. It is a story that Dean feels we all can learn from.

Dean is a popular motivational speaker and MC, known for his educational and entertaining style. A selection of speaking topics and themes:

What disadvantaged communities can teach us

The business of sport

Have we sold our souls? A look back to when sport was a passion, not a pay cheque

Is the discipline of sport changing?

Embracing effective teamwork by valuing the contribution of others

Most recently he has published a book in the areas of sports history and sociology I have recently released my new book Empire, War and Cricket to great acclaim. 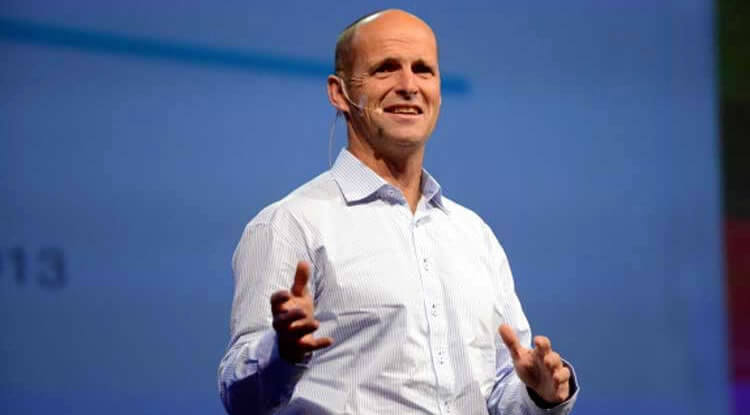 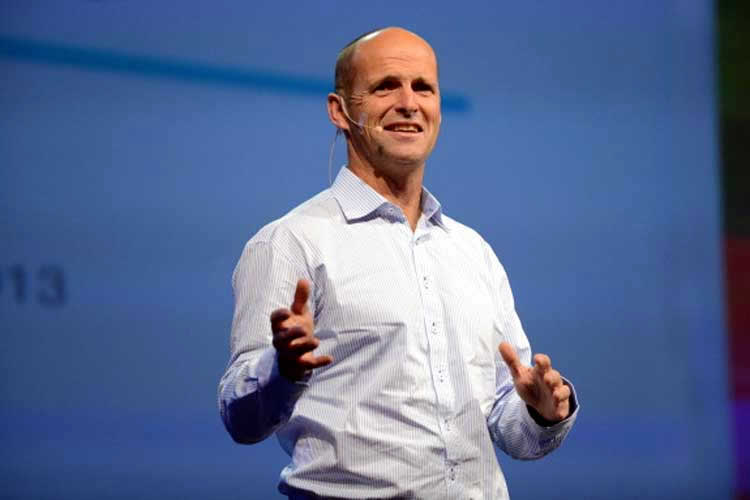 In between his coaching obligations, Gary Kirsten engages with a variety of groups in varying forums, giving insights into his leadership philosophies and how these helped Team India and Cricket South Africa reach their respective goals. His achievements and humility set him apart as speaker.

His attention to detail and structured approach makes him an effective communicator. His articulate and eloquent manner combined with an unmistakable presence endears him to all. Known for his straightforward approach, Gary has the knack of simplifying often complicated issues. His passion for excellence and accountability is infectious

It seems that we’ve forgotten that school is a place where you learn. It’s a place of preparation, not performance. Once you have learnt skills and gained confidence based on real competence, you are better prepared for the stress of performance and competition.

As a proud father and sporting icon, Gary also enjoys speaking to parents and educators about their approach to our children’s sport-life, and how it affects the children’s entire lives. Gary shares remarkable parts of his own story, and helps us to rethink and sharpen our involvement in school sports.